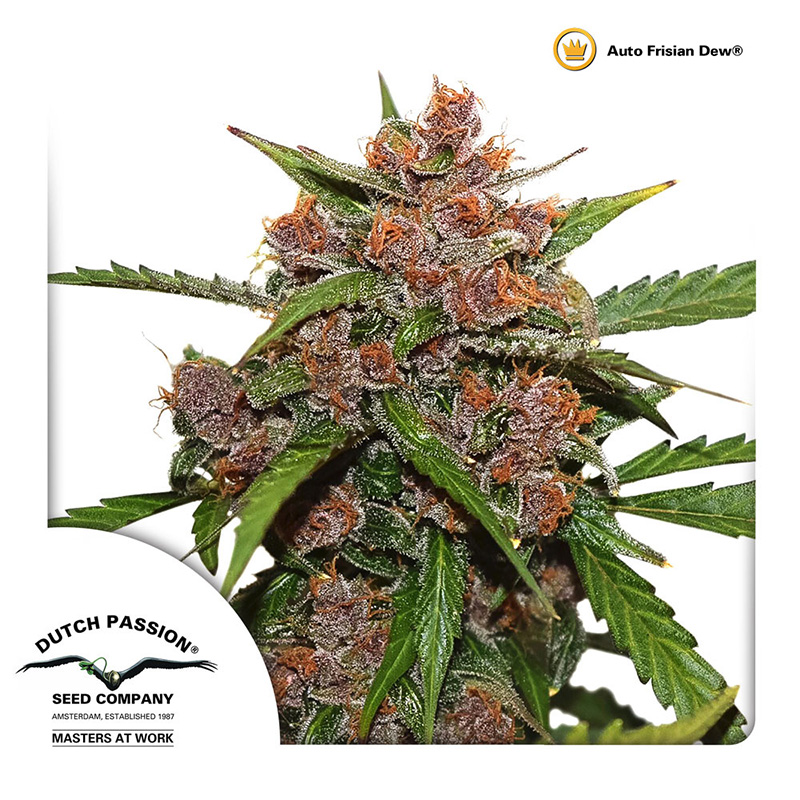 We recently had the chance to put a single cannabis plant in a small grow and decided to take the opportunity to test an AutoFrisian Dew seed. We wanted to put out a short review on the strain and our experience growing it, with the aim of giving a straight-up, no-BS report of our grow. We hope to give potential enthusiasts a heads up on what to expect by providing a quick report of our experience growing the strain.

Our AF Dew was slow to begin with, making little progress in the first week or so, but gradually built up steam and was rapidly producing strong, lengthy side-branches within the first month. Fresh growth was always very healthy and rapid throughout the grow. It came in at around 50cm in height as the flowering period began, but continued to grow to around 60cm+ as it began to flower.

Easily the most striking thing about this strain is the electric display of colours and hues which began very quickly to spread across the entire plant, producing one of the most elaborate and florid displays we’ve ever seen. The plant was grown in temperatures far above 10’C yet still produced an impressive spectrum of colours ranging from dark, rich purples to bright, pastel pinks with strong reds hidden at the base of each calyx. The colours of the plant were immediate and eye-catching, even more so when its pistils began to turn light orange, at which point the whole plant took on a new dimension of contrast and appeal. As the final phases of the grow began to unfold, the resin began to take on the appearance of fresh morning dew, adding the final touches to this truly magnificent specimen.

In terms of overall growth, the plant remained healthy and vigorous throughout the grow and fed well. We had some issues with the plant leaning over as it began to pack on size but this was easily remedied and did not become an issue overall. Its leaves were large and wide, and the branches of the plant began to stretch and bulge out into the grow-room, giving the plant a rough footprint of just under 2ft squared. Its aroma was very subtle with mild, sweet undertones.

As mentioned above, Autofrisian Dew is marketed as a mold-resistant strain. We grew our AF Dew in a relatively humid, and poorly ventilated greenhouse in mid-summer, which served as a somewhat unscientific test for this claim. The vast majority of the plant remained completely unaffected by mold, however we did have a few chunks of rot appear in some of the densest areas of the main cola, which had to be nipped out early. This isn’t to say that AF Dew is not resistant to mould, for all we know, another strain would have fared far worse in a similar environment. It is worth noting however, that humidity levels are still important factors when growing AF Dew, and that every measure should be taken to control them.

Our grower had to cut just a few days early to avoid more rot, however the finished product was of a good standard. The yield was impressive for such a small and rapid grow; each bud produced plenty of hash leaf and the plant itself produced a solid stack of bud. The buds were somewhat dense with long spaces between nodes, and its bold colours remained in the dried product, coming through in darker shades that only showed fully in sunlight.

The taste was very pleasant and subtle, much like the smell. It had soft, skunky undertones against a sweet but hashy background which was quite strong on the lungs. The high was a real creeper, and gave a strong body stone with a very creative, cerebral edge: a great smoke overall.

Those looking to grow this strain in northern climates should expect great rewards for their efforts. However, they would do well to focus on an early grow in midsummer conditions, in a well ventilated area, as it is partly the fast-flowering nature of this strain that gives it its edge in outdoor climates.

Overall, this strain has proved itself to be one of the many under-rated gems of the cannabis industry, especially in terms of attractiveness and vitality. Its creative, relaxed high perfectly complements its colourful flower formation, and its soft, smooth flavour and aroma make it an excellent choice for those who require a slightly more discreet strain. We definitely enjoyed growing this strain and would recommend Autofrisian Dew to breeders and novices alike. The grow was all around a very positive experience, but be careful not to interpret the words ‘mold-resistant’ to mean ‘mould-proof’ - the grower still needs to put in some work to ensure a healthy crop!

You can buy AutoFrisian Dew Cannabis Seeds from SeedMasters.com today!